The moon reminds me of my mum.

Not what you’d expect, you might think. No rose petals, heady romance and wandering hand in hand to happily ever after – which was a good thing, as it turned out. If that’s what the moon had promised, I’d have been seriously gypped.

Anyway, here’s how it happened.

When I was 9 (a very long time ago) I went to live with my grandmother and two aunts for the best part of a year while my parents were overseas. A work trip for my dad, the first opportunity my mum had had to travel which she’d always longed to do, and while the idea didn’t thrill me, it didn’t occur to me to difficult about it. Stuff happens.

My sisters were both at boarding school by then so it was just me, which made it easier in a way. I was the youngest, and going about my day as myself and not the pesky extra leg to be kept in her place was probably very good for me. But nevertheless, there was no escaping the fact that to me, my grandmother was a fearsome old woman: six feet tall (poor thing. What a burden it must have been back then), the epitome of Victorian propriety and self-discipline for whom displays of emotion were embarrassingly unmannerly and appearances must always be maintained.

But it really wasn’t too bad. The house itself was magic to me: rooms that breathed stories of a world long gone and traditions that lingered; gardens full of secret places; a little beach, a boatshed, a rowing boat, ledges in the sandstone rock face that were anything your imagination desired. 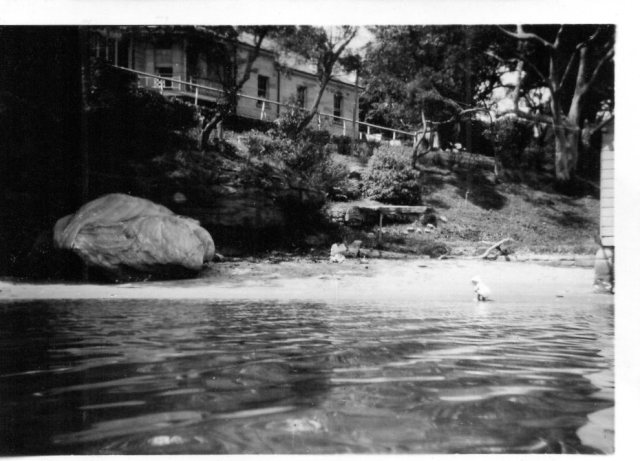 School was trickier. There were BOYS, which I wasn’t used to; alliances and enmities I knew nothing about, the spectre of Mr Ferguson who stood no nonsense, and the social rigours of the school bus.

And in the midst of this, we learned a song:
Silvery moon your gentle beaming
Lights the earth from out the sky.
Over all you light is gleaming
As you softly ride on high.
And I ponder: as you wander
Ever over land and sea
Do you gently shine upon her
Who is oh so dear to me…
and I immediately related it to my mum (which obviously wasn’t the writer’s intention but what the hell when you’re nine) and felt very sorry for myself.

Looking back, this was probably a piece of melodramatic self-indulgence (How can I make this about me…Me…ME!) since I was doing OK, but that’s how it was and that’s how it’s been ever since.

Which is good. Even though I’m eleven years older than my mum was when she died 48 years ago, I still miss her.

This entry was posted in Uncategorized and tagged moon, mum, postaday. Bookmark the permalink.